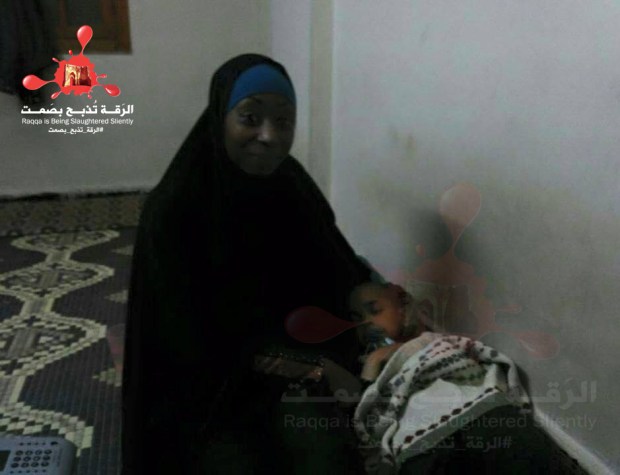 There have been many rumors recently about the fate of the French woman who defected from ISIS group in cooperation with the Brigade of Raqqa Rebels. A reporter from “Raqqa is Being Slaughtered Silently” has been able to obtain information and details about the incident through a telephone call with the security office of the brigade stationed in the outskirts of Raqqa governorate.

The story began when “Nikolai”, a French national of African origin, communicated through Skype with a member of the group collaborating with the brigade. A plan has been adopted to get her out of Raqqa with the help of a group of young men and women working with the Brigade.

Woman were transferred with her young son by three cars at 5 AM in the morning on 21 April, from Raqqa city towards the district of Suluk north of the city, right down to the areas controlled by the rebels. The cars were able to move without any problems, in coordination with a number of ISIS Emirs of check points who collaborating with the brigade. The operation ended in seven in the morning of the same day when the woman arrived to the Turkish city of Gaziantep.

Then the Brigade has communicated with a French journalist, who informed the woman’s family to come to the city of Gaziantep to receive and escort her to their homeland.

The security office of the brigade said that they helped the French woman to defect from the group and return to her homeland without any material exchange. It is just a human work to serve the revolution and the revolutionaries, and they send a message in which pledged to help any foreign man or woman to get them out of the areas controlled by the group to a safe place without any financial compensation.

It is worth mentioning that during the past months, many attempts of defection from the group had taken place, mostly through the border town of Tell Abiad, where the group formed the Islamic police, which arrested a group of foreign fighters while they were trying to defect from the group. The attempted defectors were executed later in Tabaqa city, west of Raqqa.