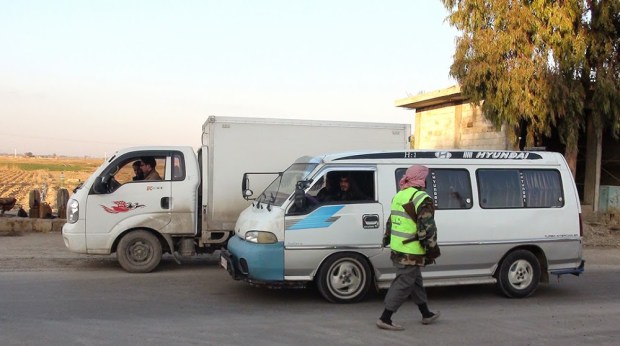 With the passage of days, ISIS group tries to make developments in the field of traffic regulation affiliated to Islamic Police, the group aims to achieve three goals by this conduct, to benefit of traffic violations from the financial side, and to create a device monitors movements of people, in addition to the attempt of showing the state’s image in front of people.

ISIS Traffic Device has passed through several levels, such as:

1. After ISIS seized the governorate of Raqqa at the beginning of 2014, the group tried at first to take advantage of previous experiences, which was running the traffic in the city, where the Islamic Body was overseeing the traffic through the office which was located near the municipal stadium, this device was composed of 20 young distributed on main joints and junctions in the city, they were regulating traffic inside Raqqa, and impose violations against the violators to curb lawlessness in traffic that hit the city after the liberation, where civilian activists were overseeing the regulation of traffic voluntarily, but there were a need to more organized and binding process against violators, so the Islamic Body established this device which was financing itself by violations and fees on the movement of large trucks entering and leaving the city, the Islamic policemen wore a special uniform, but some of them were wearing a mask, the thing which confronted by several objections by civilian activists because it were exciting suspicion, fear, and far from the civilized appearance, therefore Islamic Body responded and prohibited the mask, but ISIS group was the only non-committed of traffic rules, and they were mocking traffic policemen, and sometimes there were assault cases towards them, but after the group has seized the city, they communicated with previous employees and gave them guarantees of non-exposure, so some of them have responded.
2. The group maintained the previous rules in regulating traffic, but it gave the “Traffic Police” some power towards civilians, at the beginning they were not able to curb violations by ISIS members themselves, until the group has issued the decision that the rules of traffic are binding to its members before civilians, the vehicles which do not carry special plates were prohibited even ISIS own vehicles.

3. The Traffic Device prevented parking at specific streets to ease traffic crisis, and imposed violations and fines against anyone who violates these laws, and in other cases they confiscate cars and sometimes arrest anyone who violates traffic rules, these rules included even motorcycles, which was seen as a source of danger, where they were used in assassinations against ISIS militants.

4. Reduce theft of motorcycles and removing its danger regarding to assassinations, the group launched special courses for motorcycle driving, and issue special plates for those motorcycles, so they prevent people from riding motorcycles without obtaining a driver license enables them to drive it.

5. Regarding to vehicles and in order to complete its own state’s rules, the group is seeking now to issue metal plates carry the name of the state and a particular number, as well as the issuance of driver licenses which divided into several categories.

ISIS announced its intention to issue new driver licenses, so people should review the office of Traffic Device with a copy of previous license and two personal photos, and pay the fee of 200 SP, it takes about 3 days to receive the new license.

Therefore driver licenses of ISIS became the only acceptable licenses inside the areas controlled by the group, and all of those who have not these licenses should subject to a special driving course, thus the chaos of driving vehicles will be terminated, where a lot of people were driving cars without licenses, and traffic police could not stop them for several reasons, including the inability of many people to go to areas controlled by the regime to obtain these licenses.

ISIS pays for traffic policemen salaries ranging from 30,000 SP to 45,000 SP, in addition to food aid enjoyed by the group members, their work is currently focused on the main intersections within the city and at the entrances of the city to regulate the entry and exit of trucks.

The Traffic Device introduces a large amount of money as a result of traffic violations, which was very large and up to 50,000 SP in some cases, so this device has become a new finance source for the group.

The Traffic Device is considered for civilians one of various bodies of the group, people feared this device like as they feared the criminality of the group, and they avoid friction or fabrication problems with the members of this device, because it is no less brutal from other bodies such as security office and Hesba, despite the fact that its main task is to regulate traffic, but it regulates traffic in the most dangerous spot in the world.