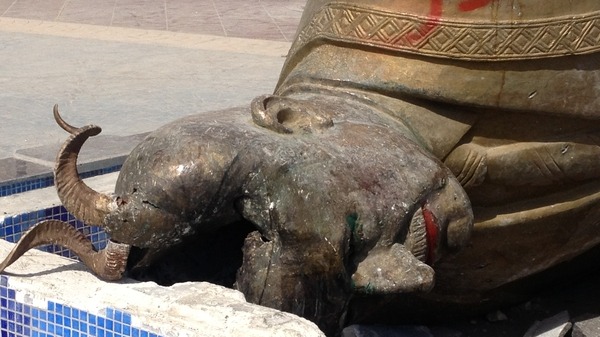 The city of Raqqa breathed freedom since the first day of the Syrian revolution, and escorted all developments rationally, and it was the safe haven for nearly two million displaced people from several governorates, but that rational was accompanied by a warned planning to inflict a knockout strike to the regime with lowest potential losses, without harming displaced people, even if it was on the account of its children.

The peaceful demonstrations pervaded all over the governorate assuring that the sons of Raqqa are a part of the march of the revolution, despite of tight security grip which were imposed on the city for fear of going out from the regime’s control.

The activists have called one of Fridays as “Proud Raqqa on the Road of Freedom”, demanding the sons of Raqqa to escalate and destabilize the regime, to be a seismic response summarizing the revolution for two years in three days, they declared a general strike and civil disobedience, and after that it developed to peaceful demonstrations roamed the city, paving to the entry of free army into the city and control the headquarters of security branches, to announce Raqqa as the first entirely liberated governorate in the Syrian Revolution, through a popular organized uprising which have protected the city and civilians from any potential losses.

After the liberation of the city, their sons have formed a local council and civil organizations to regulate the affairs of the city, and prevent some of vandals involved in the ranks of the revolution of disturbing the liberation, Raqqa city was a good example for regulation, work, and results, where peaceful demonstrations continued every day to share all revolutionary groups in pleasure and sorrows, and to stand with everyone despite the difficult circumstances in which they suffer from it, and that was the most important not to receive assistance from the Syrian National Coalition.

Raqqa city maintained the correlation between demographic components after liberation, and kept the safety and security of civilians from minority communities, even they have been regarded as a part of the revolutionary movement, and gave them the freedom which was stolen of them under the regime’s control, which was always claiming the protection of minorities.

Influx of residents of other Syrian governorates increased to the city of Raqqa after the liberation, as a result for what witnessed in the city of good handling and good behavior and honesty at work by its citizens, the thing which was not satisfying to the regime and ISIS group alike, so the regime started intensifying of aerial bombardment, and ISIS took the task of harassing civilians on the ground, where both of them have sought to tarnish the image of peaceful movement in various ways, from the brutal bombing by the regime to the burning of churches and kidnapping of activists at the hands of ISIS militants.

Today, the second anniversary of Raqqa Liberation has passed, among the displacement of their people, and the tight security grip around the necks of who stayed there, in an attempt to stop the air of freedom which civilians have breathed for a period of time, but “Proud Raqqa” are still continuing in the struggle until getting freedom.