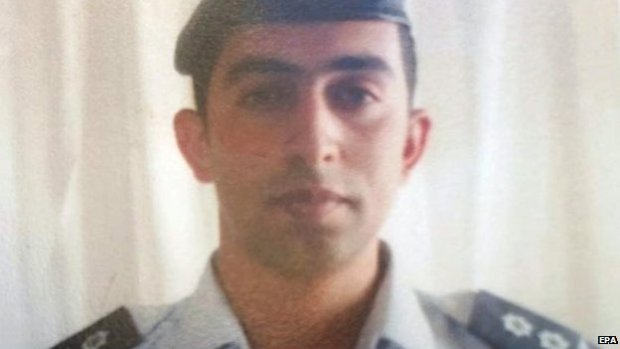 Islamic State (IS) has threatened to kill a captured Jordanian pilot and a Japanese hostage unless Jordan’s government releases a female Iraqi jihadist being held in a Jordanian prison.

The pilot, Flight Lieutenant Moaz al-Kasasbeh, was seized by IS fighters after his jet crashed while conducting a bombing mission near their Syrian stronghold of Raqqa on 24 December.

His aircraft was the first from the US-led coalition against IS to be lost over the group’s territory since air strikes on its positions in Syria were launched in September.

It is still not clear why the jet crashed – US officials denied IS claims that it was hit by a heat-seeking missile – but Lt Kasasbeh was found by militants and paraded on camera within hours.

‘They will kill me’

Lt Kasasbeh was born in the central Jordanian city of Karak in 1988. He is one of eight children from a prominent family. His uncle was a major general in the Jordanian military. 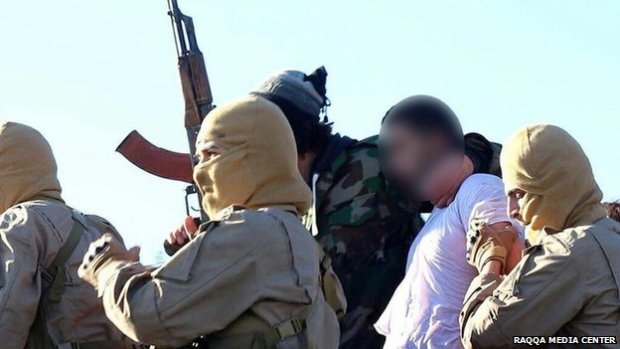 In 2009, he graduated from the King Hussein Air College and joined the Royal Jordanian Air Force (RJAF), the IS-run propaganda magazine Dabiq quoted Lt Kasasbeh as saying in an interview, the circumstances and veracity of which are not known.

After undergoing further training, he qualified as an operational pilot in 2012 and joined No 1 Squadron at the Muwaffaq Salti Air Base, which flies F-16s.

Lt Kasasbeh told Dabiq that his jet was hit by a heat-seeking missile as it flew over Raqqa province as part of a mission to destroy anti-aircraft batteries.

“I checked the system display and it indicated that the engine was damaged and burning. The plane began to deviate from its normal flight path, so I ejected.” 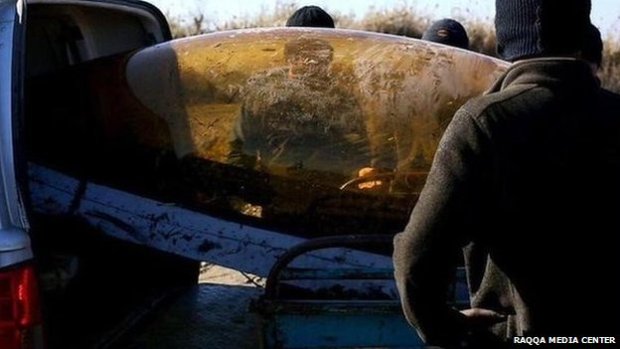 “I landed in the River Euphrates by parachute and the seat caught on some ground, keeping me fixed, until I was captured by soldiers of Islamic State,” he added.

At the end of the interview, Lt Kasasbeh was asked: “Do you know what the Islamic State will do with you?” He replied: “Yes… They will kill me.”

Lt Kasasbeh’s family urged IS to spare him, stressing that he was a devout Sunni Muslim. The pilot’s father, Youssef, told reporters: “I pray that Allah will plant mercy in their hearts and they will release him.”

In early January, there were reports that special forces personnel had attempted to rescue Lt Kasasbeh and other hostages being held by IS around Raqqa.

Activists from the group, Raqqa is Being Slaughtered Silently, cited witnesses as saying they had heard gunfire and seen helicopter gunships flying over two areas on the outskirts of the city.

However, a spokeswoman for the coalition’s Combined Joint Task Forcesaid she was not aware of any operation, and the Pentagon’s spokesman said there had been no raid involving US Special Operations troops.

Shortly afterwards, the Jordanian government is reported to have approached third parties from Turkey and Iraq and asked them to help negotiations for the release of Lt Kasasbeh. IS was said to have expressed interest in exchanging the pilot for imprisoned jihadists.

On 24 January, IS released a video purportedly showing the Japanese hostage Kenji Goto holding a picture of the decapitated body of another Japanese hostage, Haruna Yukawa, who he said was killed after Japan did not pay a $200m ransom.

Mr Goto said IS now sought a prisoner exchange. The group wanted Jordan’s government to release Sajida al-Rishawi, an Iraqi woman who was sentenced to death for her role in a suicide bomb attack on a hotel in Amman in 2005 that killed 57 people, he added.

On 27 January, IS released another video with an audio track over a still picture that appeared to show Mr Goto holding a picture of Lt Kasasbeh. A voice believed to be that of Mr Goto said he had “only 24 hours left to live” and the pilot “even less” unless Rishawi was freed.

The following day, the Jordanian government said it was prepared to release Rishawi if Lt Kasasbeh was released unharmed. However, no mention was made of Mr Goto.